Most of the food I cook, when I cook, is from scratch.  That is not because I’m particularly against semi-homemade (Oh, gawd, is that Sandra Lee slipping in there??), or on some high horse; it’s just because that is the way I learned to cook and the way I like to cook.  That said, I am not above using pre-made foods or pre-packaged ingredients every now and then.  Sometimes I just need a quick, filling meal at the last minute, and using pre-packaged ingredients is probably still healthier than eating from a fast food joint. This yellow rice and hotdogs is one of those quick meals to which I resort at such times.  I have others, but this one is a favorite.  I can’t say the idea was entirely mine though, I must give credit where credit is due.  My mother used to make something similar when I was a kid, except she used  sausages similar to vienna sausages, or some other sort of small sausage, and added bean sprouts.  It is a bit of an odd combination, but that was when we lived in Cuba; I suppose it was a case of making do what what was available. I did like it quite a bit, but did not have it again until a few years ago, when I started making it with hotdogs.  I use hotdogs and not vienna sausages because I like the taste better, and so does my family.

This is a super quick meal with, thankfully, little prep.  Quantities of ketchup or hotdogs need not be exact, it’s not critical. Follow the instructions on the rice package.  When adding the rice to the pot, add the hotdogs, and the ketchup.  Stir to break up the ketchup.

Cook for the recommended amount of time, usually about 20 minutes.

Serves 3 people, or 2 very hungry ones.

It is that simple.  I’m actually a bit embarrassed to call it a recipe. 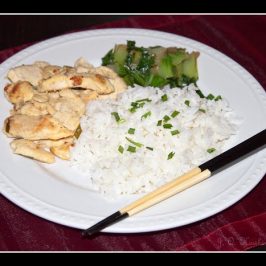 We got a new camera this week and my image processing software did not support...

It is not every day that you open your email to a comment left on... 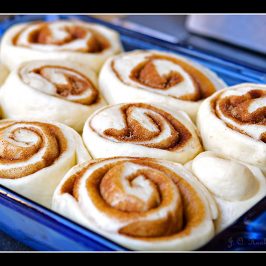 When I joined the Daring Bakers in September, the challenge was Cinnamon or Sticky Buns... 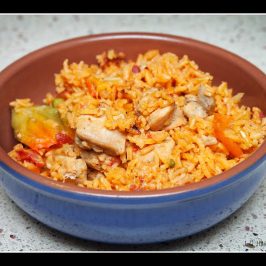 Let me start by saying that this is one of the few instances when I’m... 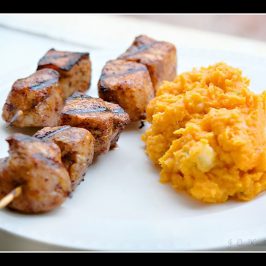 Even though I’ve been having a hard time in the kitchen since becoming pregnant, I...