Last month, while I was browsing the Mood website looking for fabric for my MSN project for July I came across this beautiful mint colored Tencel twill and fell in love with it. However, I wasn’t ready to commit because I wanted to see it and touch it first.

I’ve worked with a few Tencel twills and they feel and behave differently. Thankfully, when you buy fabric online from Mood, you get free swatches after you spend a certain amount. I happened to earn 4 swatches so, naturally, I ordered a swatch of the Tencel twill.

It was as gorgeous in person as it was on the screen. I was smitten and knew that it would be the fabric for my August MSN project.

So, August came around and I ordered the mint Tencel twill with a particular project in mind.* But, when the yardage arrived, I realized that it was too heavy for that dress and so I spent the next three weeks trying to decide what to make with it.

I loved the fabric and I wanted to make sure I put it to good use. 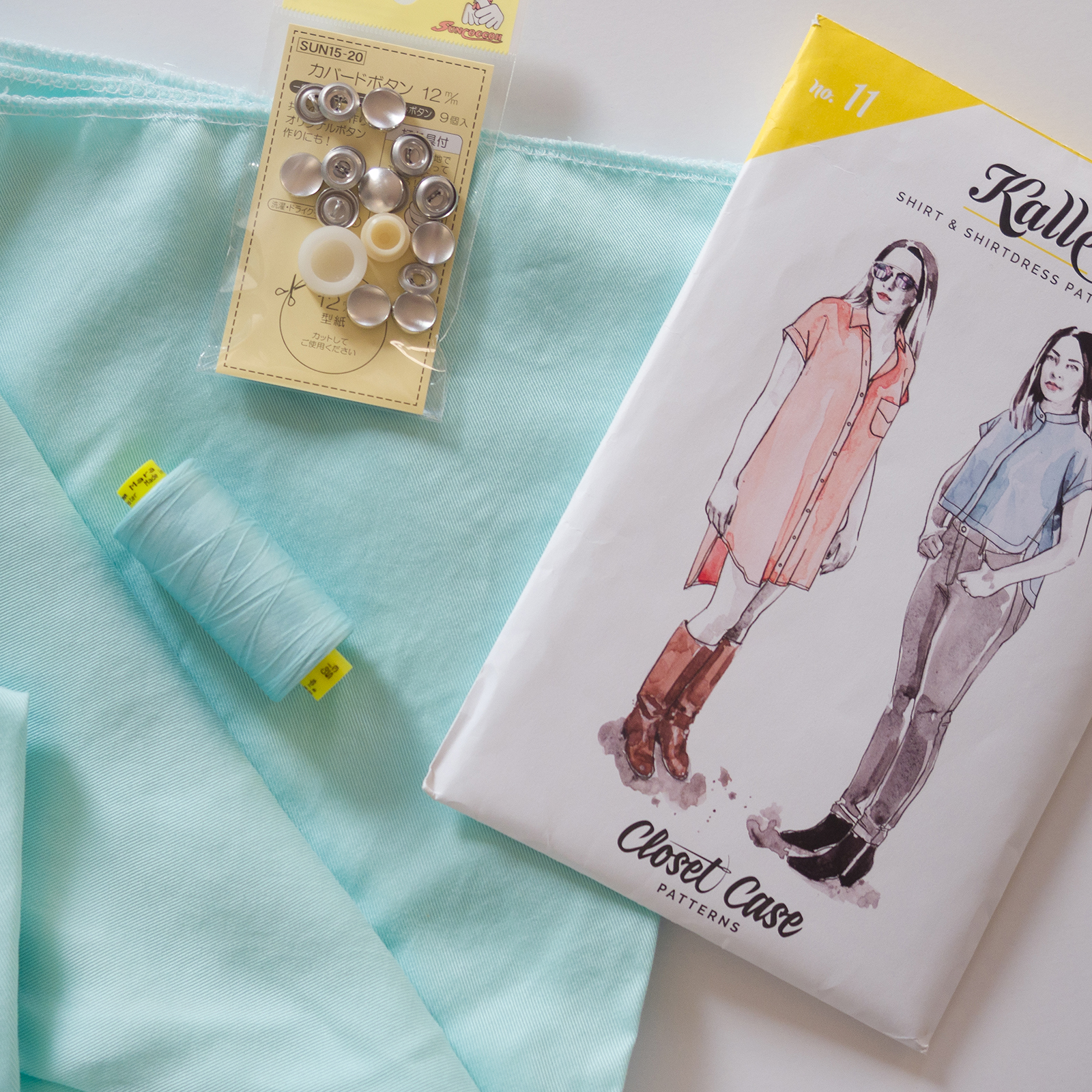 In the back of my head I knew that the fabric REALLY wanted to be Closet Core Patterns (they recently changed their name from Closet Case) Kalle Shirtdress, but I had just finished another Tencel twill Kalle in July (I have not blogged about it yet) and so I was hesitant to go that route.

So, I kept on muslining dresses that I thought would work well in the fabric, but time and time again I decided against each of those dresses.

Finally, early this week I decided to just give into the Kalle, knowing full well that the fabric was perfect for it.

And also, the deadline for the MSN posts were coming up fast, so I was running out of ideas and time!

The fabric, like most Tencel/rayons, was pretty shifty and I had to re-cut one of the fronts, but after that initial hiccup it went relatively smoothly. This was one of these instances in which scissors, rather than a rotary cutter, was the best way to cut.

I will say though that the fabric is very delicate despite its weight. It frays much more than any other similar fabric I’ve worked with, and if you so much as breathe on it wrong you’ll get a water mark that will only come out in the wash. I came to the conclusion that the best way to press it while sewing was with a dry iron.

I spilled some soup on it while sewing it (don’t eat at your sewing desk!) and was terrified that the small grease mark would be permanent, but I put some Dawn washing liquid on it and let it dry, then after I was done making the dress, I put it through the wash. The grease stain was gone, as were all my other markings. 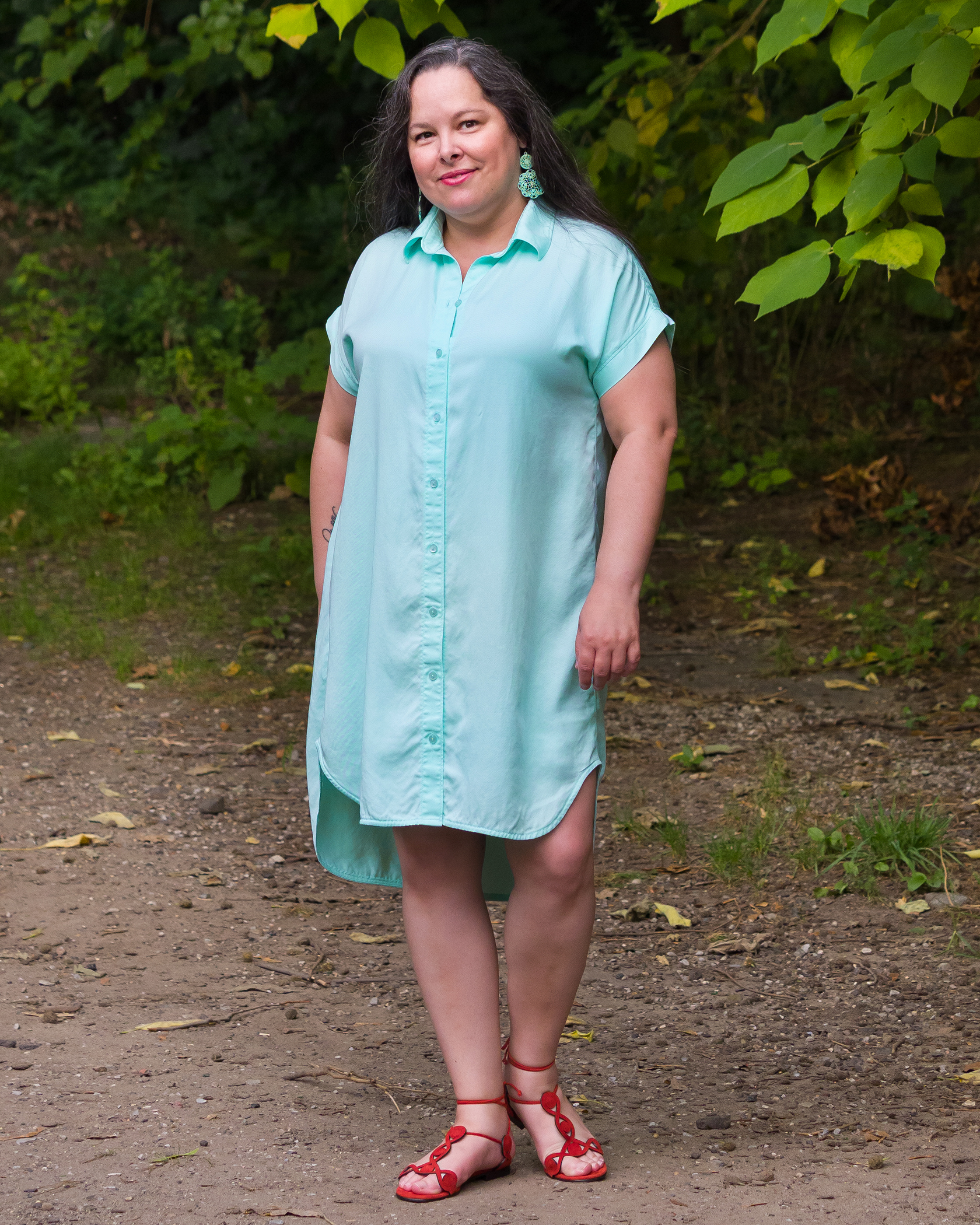 It’s also pretty easy to pull out a fiber from the fabric, so you have to be very careful if you have to use a seam ripper not to accidentally grab a fiber, specially if you are using perfectly matching thread. Ask me how I know.

That said, it was worth it. I absolutely love the color, the drape, and the weight. And, listen, many fabrics are difficult, MUCH more difficult, to work with, and also delicate, so that should not be a reason NOT to use a fabric you love. You just have to be aware that you need to take extra care.

The pattern itself I could probably make in my sleep now that I have made it four times. I sized down and made a straight size 12.

This time, however, I did two things differently.

First, the pattern has you cut off the center front edge of the right side in order to sew in a separate buttonhole placket. My fabric was shifty, as I said, and I felt that would just add to my headaches. So, instead, I treated the right front the same way the pattern has you treat the left front (the button side). Just fold twice and top stitch. If you are not making the hidden button placket, there is no reason why you HAVE to sew in the buttonhole placket. 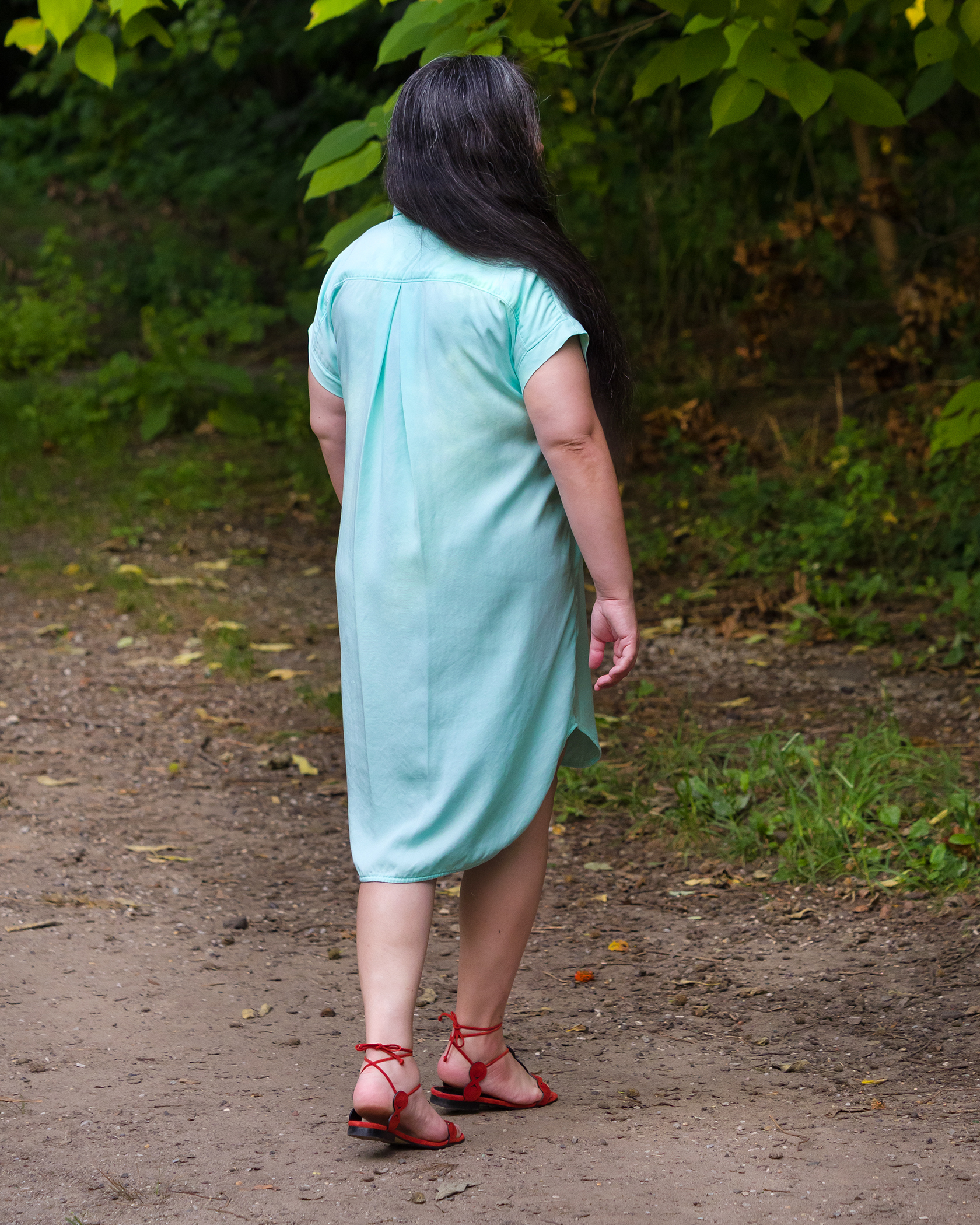 I also made the collar with stand, which I had only done with one Kalle previously, and it was a very stable shirting fabric. I have made all other ones with a band collar. I think I prefer it this way, it lays nicely.

Making this collar in a soft, drapey fabric was not cake, but, all things considered, it came out well enough.

I did use a different method for constructing the collar, not the one in the pattern instructions, just because I prefer how the method I used makes the center fronts of the band look nice and neat on both sides. Just personal preference, but I am forever looking for the best, neatest way to construct and attach a collars

When I decided to go for the Kalle, I planned on making fabric covered buttons because I couldn’t find any buttons in the Garment District that went well with the fabric. But, when I started making the buttons, I realized that the button kit was stretching some of the fabric too far, to the point of tearing, so I nixed that idea. Then I found the buttons I ended up using in my stash and they were perfect. 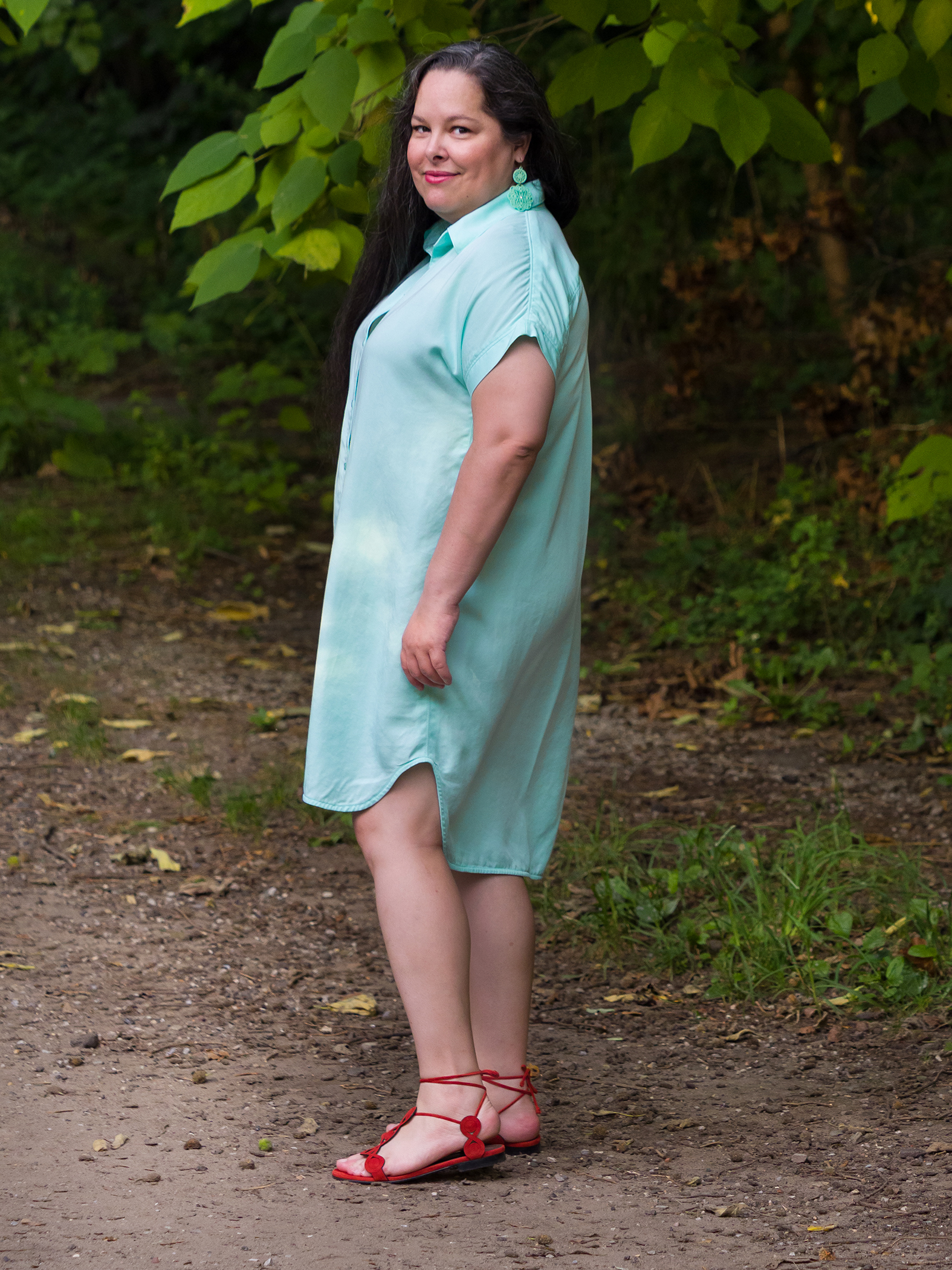 One last thing that I have experienced with all but one of the Kalles: getting the hem topstitching to catch all of the bias tape, folded correctly, evenly, and without missed spots is HARD! The only time I didn’t have a problem was when I made a Kalle from cotton shirting, which takes a pressing well and is not drapey. The other ones made from linen or Tencel twill, have required an incredible amount of patience and then some hand stitching to secure the places here and there that the machine stitching didn’t catch. It is what it is.

In the end, despite the hesitation, hiccups, and work, I really love the shirt and I think the color is just amazing.

The fabric is currently sold out in this color, but it is reorderable so keep an eye out for it. It also comes in other colors, including dusty rose and yellow, which were my other choices.

But if you think the troubles ended with the last pressing, you are wrong! 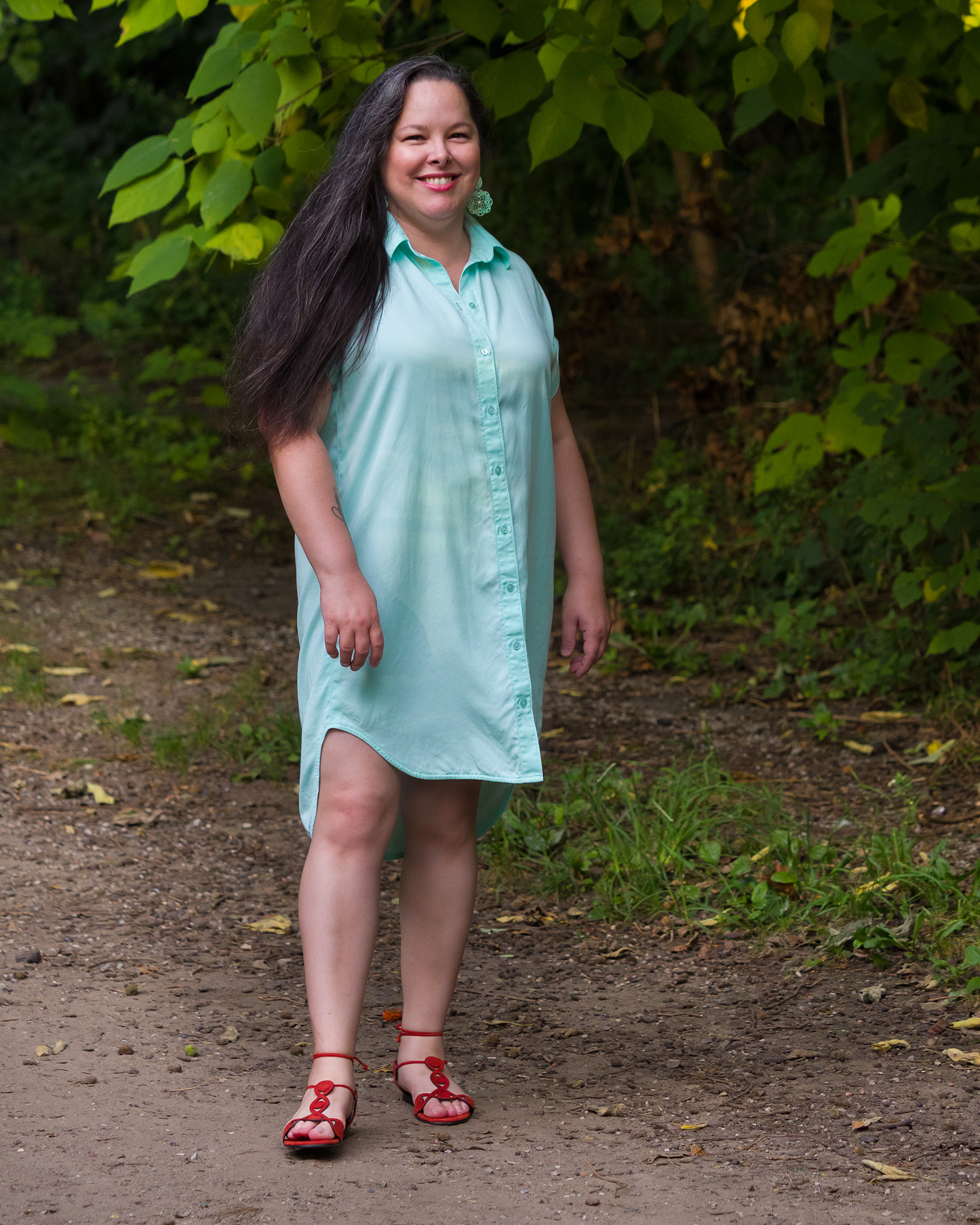 Getting photos of this dress proved to be a mission.

The weather didn’t cooperate for days, it was sunny, then windy, then we thought it was OK so we went outside to try to get some shots but that was a mistake.

It wasn’t just that there were people everywhere, but, as we were walking looking for somewhere less busy, it started drizzling so we had to run back the apartment.

To add insult to injury, in those photos the dress color rendered blue and I couldn’t fix it despite a ton of processing.

We went out again the next day, to the park this time. Got eaten alive by bugs, but at least the dress color was right (or as close as it’s going to get)!

In the end, these were all the decent photos I could get, but it’s done and done.

By the way, the dress survived the drizzles unscathed.

* Although Mood Fabrics provided me with store credit to purchase this fabric, all opinions are my own.

To get a 10% discount on your order from www.moodfabrics.com, use code MSNTSH2. Offer valid online only and does not expire. Discount applied at checkout. Not to be combined with any other offers, coupon codes, etc. Excludes items beginning with PV, SUN, or AWG. 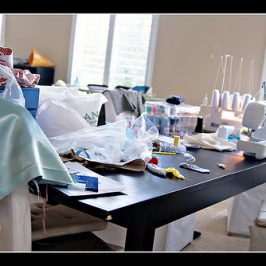 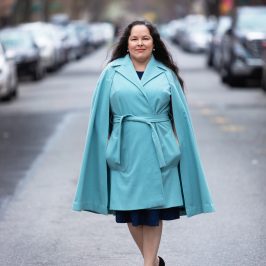 Back in February I posted the beginning of a video series about the making of... 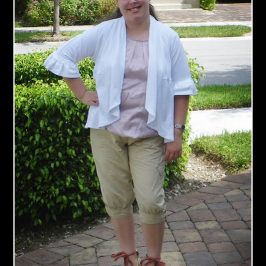 I have been meaning to blog this for two weeks but I just couldn’t get... 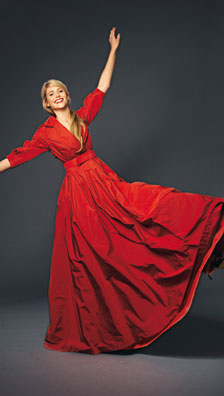 The contents of next month’s BWOF issue are up on the German site!  I had... 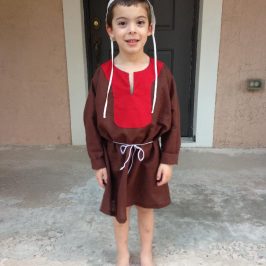 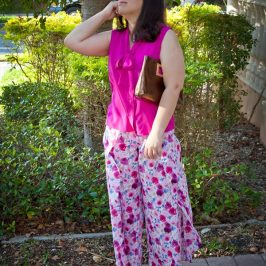